45,000 years ago, the human race started to create shoes to protect their feet from harsh weather conditions, but through time this need for protection had become about fashion and making a statement. They displayed a persons occupation, social status, wealth and fashion sense.

This style of shoe was one of the first designed by the human race and as we can see, doesn’t look very comfortable. But it does its job of protecting our feet from the environment. This style was designed and adapted by many people throughout Africa

The Ancient Egyptians designed leather sandals to protect their feet from the tough desert conditions. This style was later adapted by people from all over Eurasia as it was both practical and moderately comfortable. 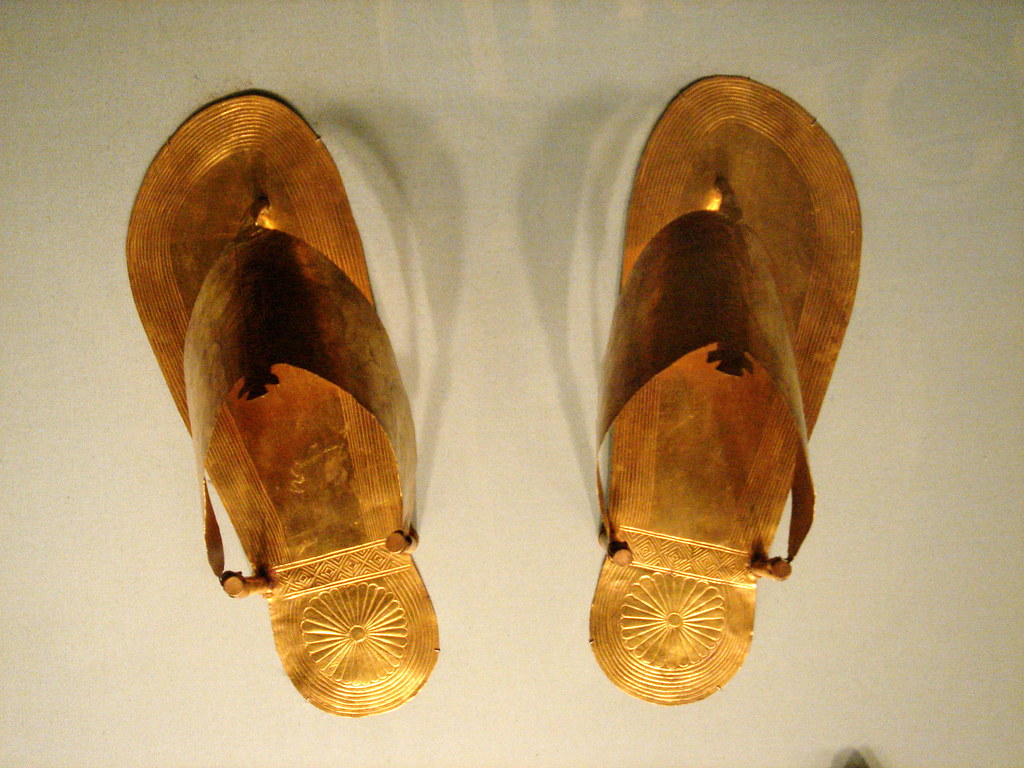 In ancient Egypt the tomb of a princess was found with a pair of gold sandals in her tomb. Whilst desirable by the rich you can imagine that in the desert they would get extremely hot, as gold is one of the best conductors known to man.

The Ancient Greeks adapted a style of terracotta boots to be worn which were uncomfortable but they protected from the weather as the terracotta didn’t get too hot in extreme temperatures and provided cover from rain and water.

Kothorni are a type of platform sandals worn by Ancient Roman actors. They were often made of wood or cork.

Sabot is a type of shoe worn by medieval European peasants. It is made from a single piece of timber and carved into a clog type shoe.

Pikeman’s shoes were worn by medieval men and were fashionable for the long pointed end.

This style of shoe was one of the first high heels to be worn by women. It worn by Catherine Medici on her wedding day in 1553, age 14, to make her seem taller.
In the 1600s, the English government passed a law stating that any woman who tried to seduce a man into marrying her by wearing high heels would be tried as a witch and in America high heels were banned.

During his reign Louis XIV of France liked to wear high heels and big wigs to try and make himself seem taller as he was only 5″4/162 cm tall. This was often adapted by men to make themselves seem taller.

During the French Revolution, Napoleon banned high heels in hopes to make everybody more equal, as high heels were something that were mostly only worn by the rich. Marie Antoinette wore two inch heels to her execution, and begins the trend of lower heels.
In the 1860s high heels made their comeback, and just like the corsets were said to be harmless, claiming that they alleviated back problems, prevented hunching and made walking less tiring, when really they were doing the exact opposite. 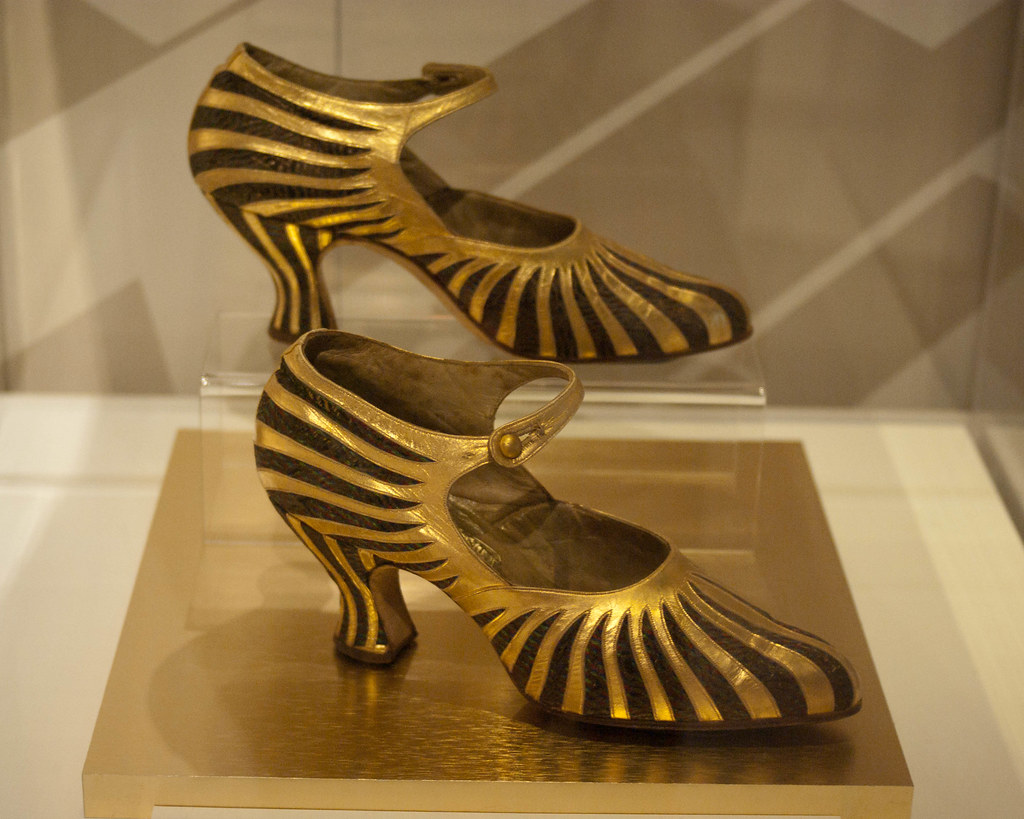 Examples of women’s and men’s shoes 1920’s
After WWI the Jazz Age/Roaring 20’s came about and glitz and glamour were in. T-bars, Mary Janes, Pumps, Oxford Shoes and Saddle Shoes were very popular at the time.

Examples of women’s and men’s shoes 1930’s
30s shoes were a mix of lasting practicality and pretty embellishment such as cut outs Ladies shoes are those such as oxfords, heels, sandals, formal and dancing styles.

40s Women’s shoes styles such as the  wedge, slingback, sandal, oxford, Mary Jane, saddle shoe and peep toe pumps were the height of fashion.1940s mens shoes reflect the quality and sensibility of footwear during WWII and post WWII era. Solid and two toned oxfords slip-ons were standard shoes for men in the forties. Ankle boots and loafers added a bit more style to men’s shoes. 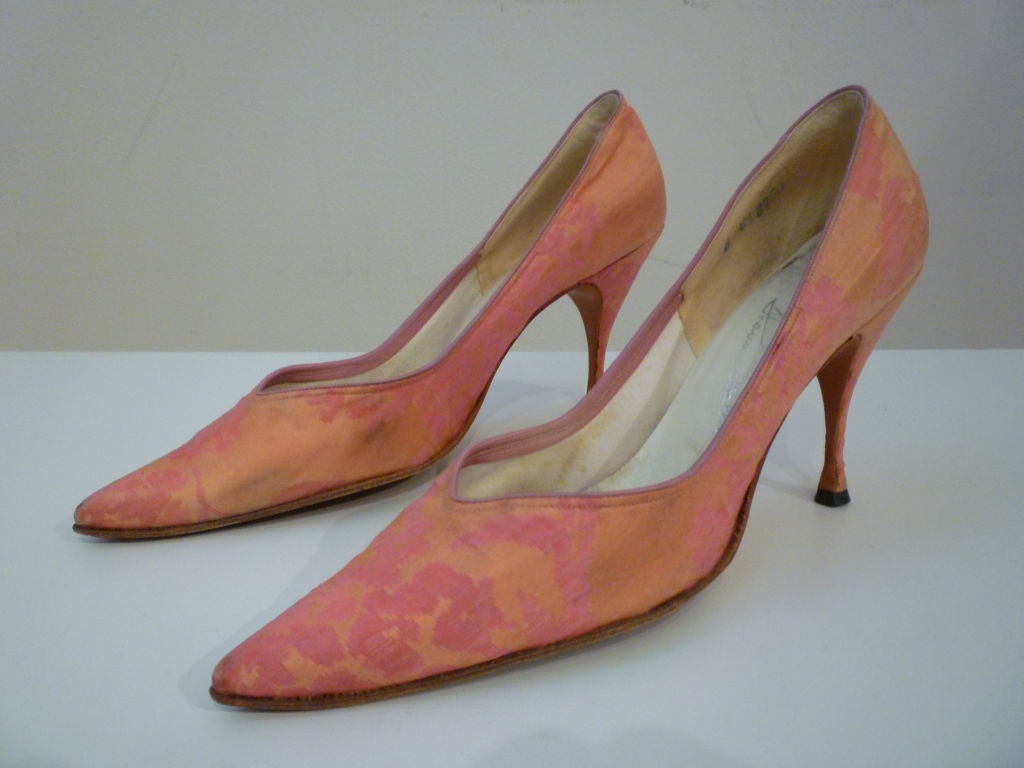 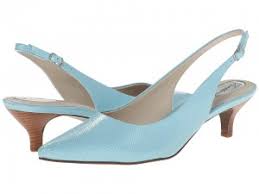 During the 60’s the flower power/hippie movement came about and inspired many bright, floral patterns. In the 60’s flats were popular in bright colors. Sandals/flip flop also became what we know it as today in the 1960s. GoGo boots became an iconic shoe of 1960s and into the 1970s. Men shoes included suede lace up oxfords, loafers, Chelsea boots, western boots, chukka’s, retro sneakers, and leather sandals. Most of these styles are still popular today. 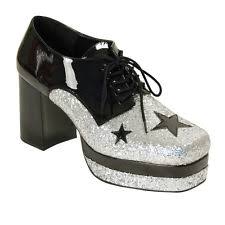 The 70’s were all about the disco, and platform shoes for both men and women but many shoes from the 60’s were also quite popular.

The 90’s was grunge style and we were introduced to Dr. Martens, embellished boots, studded shoes and more. Loafers, platform flip-flops/thongs and holographic shoes were also quite popular. 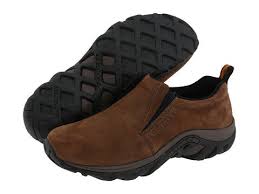 In the early 2000s, there were some very odd shoe trends ugg boots, cowboy/girl boots, crocs, gladiator sandals, fringed boots, and more. Thankfully most of these aren’t very common anymore. However Nike and Reebok and Adidas were all on the rise, giving us some comfy runners to wear. Examples of women’s and men’s shoes 2010’s
Shoes off the 2010’s should be pretty familiar to us and although there are new styles of shoes we are resurrecting some of the older ones too.
What your favorite style of shoe?
HistoryTeen 🙂

© HistoryTeen and HistoryTeen.wordpress.com, 2016. Unauthorized use and/or duplication of this material without express and written permission from this site’s author and/or owner is strictly prohibited. Excerpts and links may be used, provided that full and clear credit is given to HistoryTeen with appropriate and specific direction to the original content.

This work is licensed under a Creative Commons Attribution-ShareAlike 4.0 International License.